He brings to the modern time the work of a number of American researchers and weaves some great case studies in a very engaging way.

The one element he needs is the dynamic behind why 'if you publish it people will come'. Of course this is not true but is a truism and it all comes down to the basis of relationships and notably relationships online.

We go to the places where we know there will be like minded people. We talk to people with similar interests, we seek contexts where the values are akin to our own when we are in the 'mood'. We migrate to the blogs that interests us and then pass along the best to people who follow our blog.

On page 217, Clay explains the nature of 'networks of dense clusters', with a nice explanatory diagram which is a social media take on social networks.

There is some interesting work from the Haas Business School Alumni Networks' blog Group Scope which is not theoretical but is similar and from real life mapping and which shows the diversity of organisations (click here to see interactive version of the graphic) that form around a range of relatively narrow values and through a range of online channels for communication.

It is the basis upon which the Relationship Value Model ( a very European model) is predicated.


Group Scope have been investigating ‘hot company’ networks based on the idea that key people and investors can help point the way to new companies. They point out that the goal of a ‘derivative network’ is to take a network of interest (aka values systems) and ‘invert’ it to see another view of its affiliations. In each of the ensuing three derivative maps, they expose new sets of people and companies that are not in the group of ‘hot companies,’ but are related to that group through these derivative networks because they have common value systems interests.

In other words, the common themes of 'hot companies' (aka 'hot company values systems') are of interest to a wide, interlinked, network.

Here is a Touchgraph image of this blog and we can see the networked relationships: 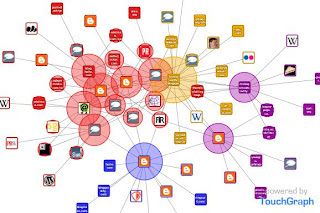 It is closely interlinked with a relatively few (but germane) other blogs and sites. 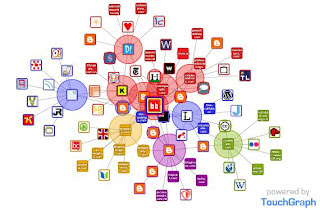 BoingBoing.net, for all its reach is not as heavily networked. It is like a newspaper, a broadcast medium. It is the point well made in Clay's book.

What PR can take out of this is that the 'top blogs', the ones with a big readership and consequently relatively little interactivity, are really just publishers of stuff like any other mass media. If the content from these 'broadcast bloggers' is picked up by the network of dense clusters, great. But if not, try an advert in The Times.

On the other hand, further down the power curve, people who are interactive will pass on the news adding value (commentary, personal recommendation, insights and other values) on the way.

Thus PR is about relationships in this milieu where values are added to the values public relations explicates for its clients. In the networked community, values have a dense relevance among people who have a close relationship with them. These communities are very affective. They are the real key to reputation, for when content in the communities migrates to other (including, but not exclusively broadcast) media, the effect is significant because of the added values contributed by the networked communities.

Let me explain. Suppose two actors (people) have common interests in similar values but there is no communication between them. In such a case there is no possibility of a relationship forming. However, in a network of dense clusters, there will be a third party who can act as the bridge between the two original actors and will show the values one to the other either overtly or, more often, through other values that are common to all three.

It explains the phenomenon of why RSS is so powerful in bringing relevant people and information to us so quickly. It explains how some activities truly 'go viral' online and it also shows that effective values systems, including corporate values systems have a wider and diverse online 'community' of direct, related and indirect interest. To miss quote an ex US president 'its the values stupid' .

In recent weeks, I have been exploring values and value systems for clients. Of course, driven by the idea that 'key messages', a 20th century marketing idea for brand exposure in mass media, most client have such messages in the meta data on their web sites (although some are far from well optimised). But often these 'keywords' are at odds with the actual content that people seek or read. Even worse, the value systems offered in texts and images on web sites miss the mark which shows up in the demographic data now available from services like Google Trends and MSN labs.

So far, every time we have shown these results to clients, there is an element of shock and a demand for re-evaluation of corporate and brand value systems as well as web design. The former falls directly into the lap of the PR practitioner who now can clearly see where the disconnect (dissonance) between the 'user generated social (sometimes market) segment' and the organisation lays.

Here we begin to see how whole organisations can be changed by the 'messages' (aka values) and how the online community is having a direct influence not only on brand positioning but corporate positioning, not to mention direction, as well.

There are more than a few organisations that are beginning to see that corporate values are critical to long term survival.

The book is worth reading and with just the one further, relationship values, step, would be seminal.

Thank you Clay.
Posted by David Phillips at 3:04 pm