There is an urgent need for a strategic analysis of what is really needed across all the PR disciplines. The threat is significant and most practitioner are blithely unaware they are under fire as the PR institutions play the fiddle.

Now we can describe the nature of public relations  it gets much easier to do a wide range of things like predict the future of PR.

The great value of the Lisbon Theory is that it can be evaluated in so many ways. We can identify perspectives, they are a set of values. We can find values evident in people's use of the internet through the application of search data and semantics.

We can identify relationships by seeking out common values between people and discover that people with common values create groups, form relationships and motivate each other. Better than that we can quickly and easily find the proof we need to show how precise our research is.

The struggle to be able to evaluate PR is now part of its Lisbon Theory description and it is not hard.

With this capability, it is going to be interesting to look at the future of PR. It is quite disturbing.

In particular and using the Lisbon Theory, I will consider three areas of practice:

From the perspective (v) of marketing directors (n) to what extent (e) is a 50% cut in newspaper readership (o) significant (s)? 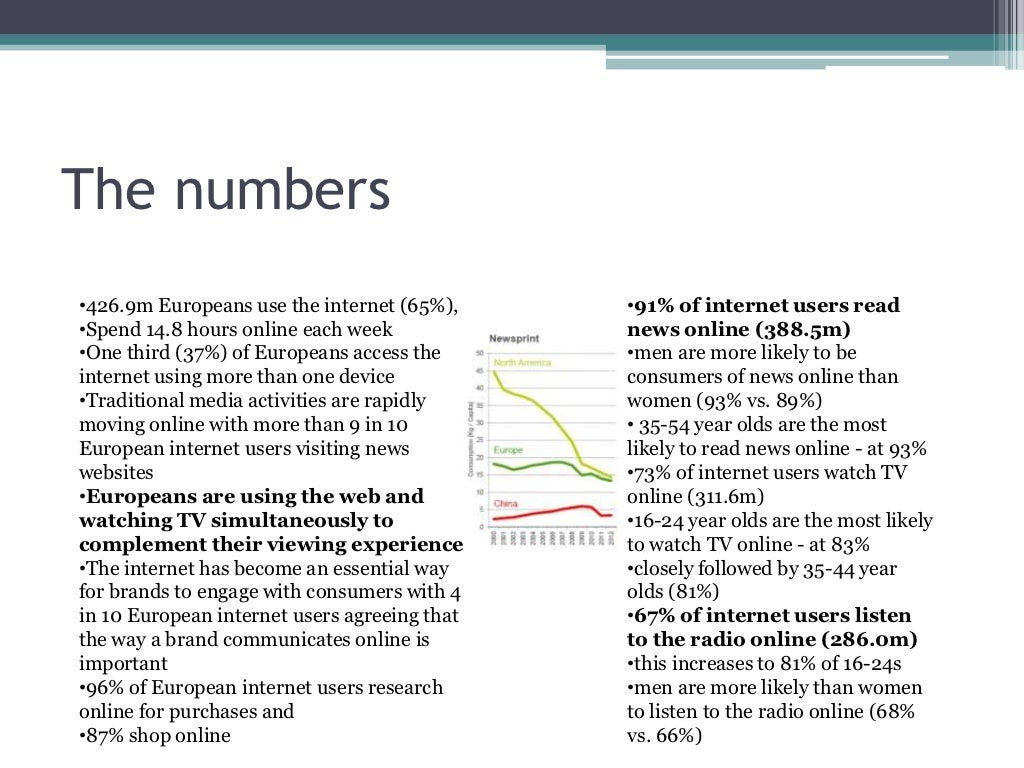 The chart in the middle is the one to watch. It shows consumption of the raw material of newspapers, newsprint.
The trend is down.
It is easy to imagine this is because of the internet but this is not exclusively the case. Advertising drift and other factors have also contributed.
In the meantime we note that the internet is a distraction because people use the internet when they consume other media output and they use internet platforms to access content, and in particular, news.

The internet, has become pervasive in the news business. Online news has escaped the PC and Laptop and is now read on tablets and mobiles. It is now common to watch iPlayer and similar channels to follow TV output and there are now a number of new 'TV' competitors emerging. Google+ is begining to look more like news TV than many expected and YouTube channels are becoming ever more popular (the BBC has half a million viewers). The White House Channel is a 'TV news station' in  its own right. We can expect many more such News Channels. TV is strong but...

Newspapers have some really good radio stations and there are many ways that online radio is bundled. Not threatened yet but soon we will see TV and radio dependant on third party internet delivered content. 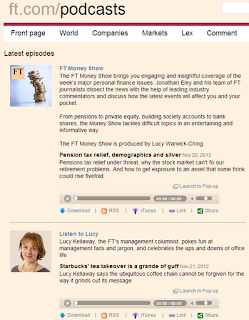 When we come to print, the story is not so good. 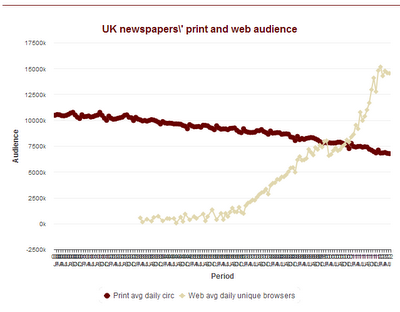 British newspaper circulations are among the worst performers in Europe, according to industry analyst and consultant Jim Chisholm.

It is important to note from this Guardian analysis that there are MORE THAN  50% of readers coming from the internet. Newspapers and magazines now depend on the interest for more than half of their readership. 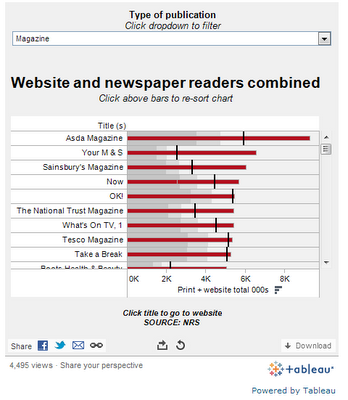 In France, but Brazil was way ahead, there is a move to prevent Google from indexing news sites and or preventing Google adding content on its Google News service unless the search Giant pays. Some 30 percent to 40 percent of the traffic on French news sites comes from Google’s links (much less than in the UK). There are murmurings of a European wide ban.

In the UK that would just about halve the number of people seeing the news in newspapers and magazines.

What has to be the PR media relations response?

• Traditional content is also published online. It is therefor importnat to offer content for the online editions.
• The traditional media is fighting a rear-guard action. This means PR needs new ways to get to value partners.
• There are alternatives to the old model in every case – the tipping point is getting very close (TV, Radio, Print).
• If linking to newspaper content by Google is prohibited, the media relations part of the PR industry will need a new model very fast because the reach of print alone is far too small for the investment needed to get coverage. PR needs to prepare for some quite alarming scenarios. At present much of the industry is predicated on a very sickly one trick pony.
• It is possible for the PR industry to create its own hybrid media concoction but one suspects there will be other entities in this space soon as well.
• The bottom line – the traditional media relations model is broken and we need a new one.

The future of media relations is pretty poor. Without online initiatives (and that means much more than just Facebook and Twitter), there will be severe financial pressure on the agencies. It could be less then a year if the French prevail but a continuing 20% attrition as in the last ten years, straight line decline will kill off media relations as we know it by 2030.

From the perspective (v) of Board Directors (n) to what extent (e) are corporate values (o) recognised assets (s)?

For a very long time, the corporate affairs practitioners were pretty sure that this 'internet thing' would not affects their realm of cosy one on one relationships.

As it turns out there is a lot going on that affects corporate affairs.

Of course we start with the watchers of corporate activities. Almost anyone can take a view of almost any company based on its online presence.

It is the nature of internet transparency, and porosity, which makes almost all corporate activity accessible to the networked digital community. In addition, such opacity is served by third parties from Corporate Watch to Safe Call. There are videos and stories a plenty.

As more online monitoring migrates to semantic driven indexing, organisations become more vulnerable because it is easy to look for content relating to obscure subjects in semantic relationship with an organisation.

Much of this affects corporate brand.

An analysis of 50,000 US consumers has found that when positive brand equity and positive corporate reputation were combined the effects are even more positive than the individual power of each. It seems that there is a multiplier effect as the nexus of corporate and brand values complement each other.

After the Sandy storm, even Apple is giving to the Big Apple. The tech giant is giving generously to New York City. It helps deliver corporate brand values to consumers who are able, in a networked society, to  cross-over from consumer to corporate values and identify with or reject them. The same was found, if not expressed in such terms by the Cambridge Forum 2012 Reputation in and Age of Protest.  No more has to be said about BBC Newsnight amateurism,  the relevance and cross-over between corporate deeds and miss-deeds, corporate brand and consumer brand values is evident to the networked world and people react .
The simple truth is that Corporate Affairs now has a role explicating the organisation's values where the network carries its values across what once would have been stakeholders or publics but which now are networked people with common semantic interests in the organisation which are also reflected in their personal values.

What does PR have to do?

From the perspective (v) of politicians (n) to what extent (e) are ill briefed lobbyists (o) of interest (s)?

The public affairs part of the PR industry is now facing its biggest change since 1945.

Ordinary citizens are now as well briefed as Ministers of State, the nature of internet transparency and porosity has blown the whistle on relationships between organisations and politicians that are too cosy and there is no shortage of material for briefing and counter briefing politicians and their staff.

Internet aided briefing is now commonly available. News of battles in far off places is instantly at the disposal of Hilary Clinton and Clinton Hilary. Street by street flooding reports, electricity supply and emergency food stations are available to the world in the middle of a hurricane. Where public tenders are available and even deeply hidden is now there for you to see now. You can even watch the rockets landing in real time in the Middle East by satellite and from your own home. For politician, the role of social media in their future career is patently obvious.

To imagine that a lobbyist can attempt to change the view of a politician without a profound capability to seek out the latest and best online knowledge is not realistic. For the political campaigner to under-rate social media, is suicide.

From every perspective, Public Relations has to embrace the internet.
It is not just 'Social Media' but everything that the internet has to offer.

Its professional bodies have some training available. Few universities contribute and all the time the future of the old forms of PR practice get close to the precipice of irrelevance.

There is an urgent need for a strategic analysis of what is really needed across all the PR disciplines. The threat is significant and most practitioner are blithely unaware they are under fire as the PR institutions play the fiddle.

From the perspective (v) of PR practitioners (n) to what extent (e)are the professional associations (o) protecting their interests (s)?

Well, this is it: 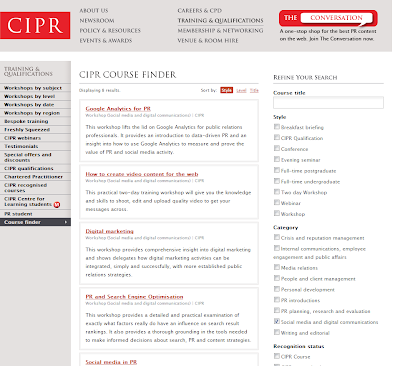 Posted by David Phillips at 5:21 pm