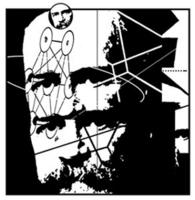 "Everyone knows what attention is. It is the taking possession by the mind in clear and vivid form, of one out of what seem several simultaneously possible objects or trains of thought...It implies withdrawal from some things in order to deal effectively with others." (William James).

In the practice of Public Relations, it is a critical element in the process of changing the value of relationships between organisations and their publics and I promised to cover more cognitive psychology as it affect the practice of PR.

Attention is a cognitive process. It is effective when a person is selectively concentrating on one thing while ignoring other things.

It is one of the most intensely studied topics within psychology and cognitive neuroscience. It is associated with the human mind (decision-making, memory, emotion, etc.), attention is considered the most concrete because it is tied so closely to perception. As such, it is a gateway to the rest of cognition.

In the Relationship Value Model, we seek attention by working in appropriate (i.e. publics inhabited - see also Social Frames) networks and use communications channels. This is where we can gain attention and awareness to prompt the senses using tokens (by their nature explicit). In this way, we can use a range of emotional triggers that do not need to rely on memory (implicit, tacit, metaphorical values). In PR we bring values into play to create cognitive convergence and thereby begin the process of creating perception and memories about our client/brand/product/issue. In this way we add value through relationships.

The PR process is unlike the advertising model in that we are seeking a symbiotic empathy with publics rather than hitting them over the head with an advertising mallet. George Chua commented on these moves in marketing last week. Indeed recent research by Robert Heath and Agnes Nairn suggest, that advertising (which is rapidly becomming another Domian of PR practice) is finding that this aproach is quite critical.

Posted by David Phillips at 4:41 pm